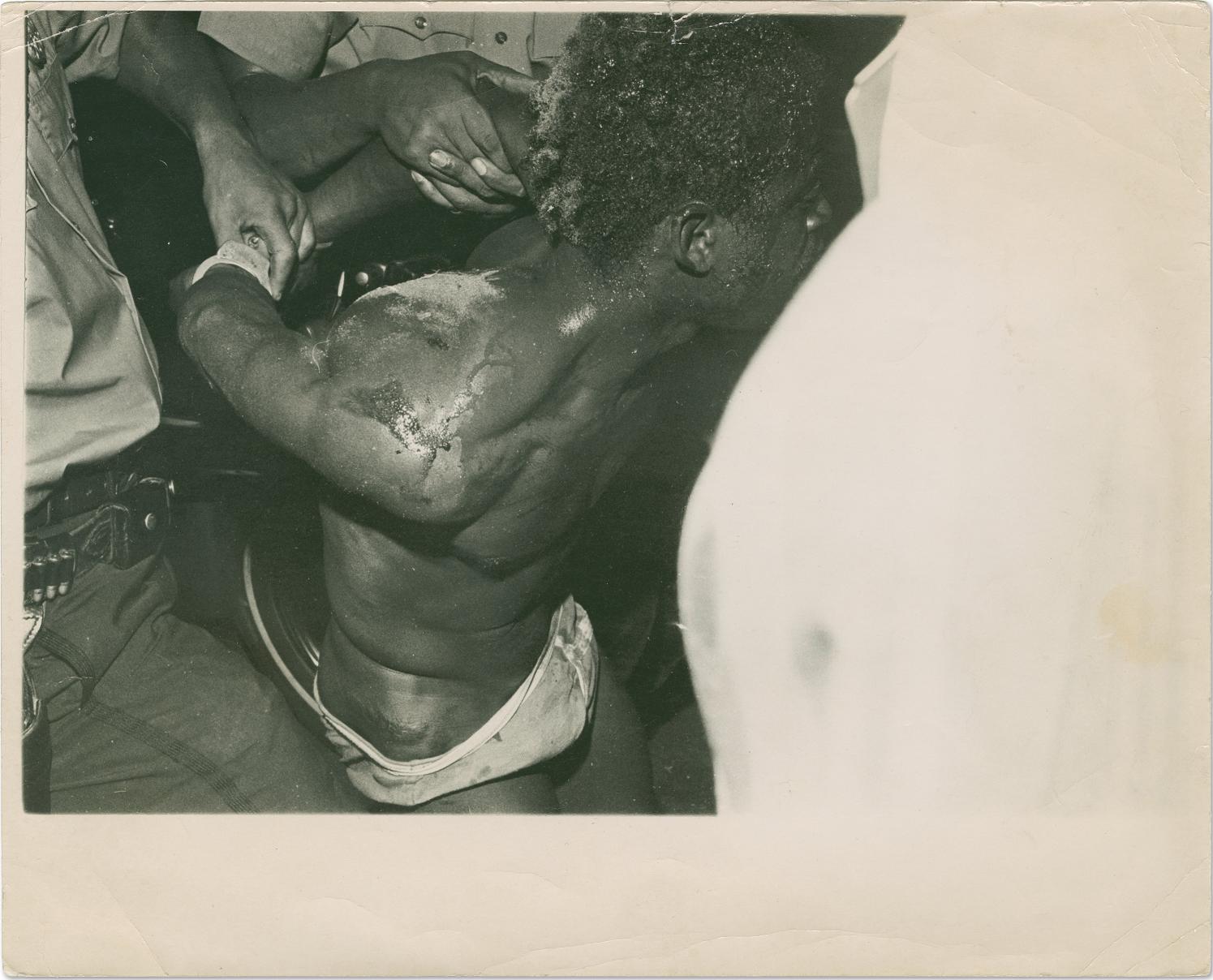 I was working on the description of the photograph illustrated above, for my March auction, and it struck a chord that inspired me to share it with you. I had discarded this from a group of images, but when I looked at it more closely I decided to include it.

The photograph appears to be from 1930 – 1940. There is no indication of photographer, publisher or subject. At first I couldn’t make out much. It wasn’t clear that the whitish area at the right wasn’t a defect in the negative, until I realized it was the shoulder or body of someone who was “blocking the view.” And it took me a while to see bullets in the belt at the left, and then the bit of uniform, that indicated that policemen were twisting the arms of the young black man whose upper body was bare. As our view is very restricted, I couldn’t tell the position of the youth in relation to the space that was hardly indicated. His face points into a triangular wedge in the light area at the right. There is a small white dot near the apex of the triangle. Is that light reflecting off his eye?

From looking at so many daguerreotypes of two people, I have become accustomed to paying a lot of attention to the subjects’ hands. The position of the arms and hands are often very revealing of the relationship between the subjects. Here the hands are particularly interesting, as the policemen’s hands hold the prisoner’s hands in a curious manner, gentle as well as containing. 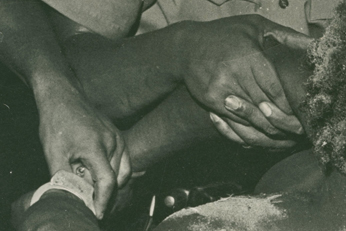 The light area at the right has some light gray blotches that indicate it is something right in front of the camera lens. This lightness is almost the same color as the margins. In this case the image is printed smaller than the photographic paper on which it is printed, so the bottom margin is much wider than the other margins. This wide bottom margin almost merges with the white area, so the image of the caught man floats within a light border with light strips of various thickness at the left, top and bottom, and a curved irregular wider shape at the right.

The question arises: what is the actual “picture?”

This has two dimensions. One is to determine the “content” of the picture from so little supporting information. The other is what, on the object in front of us, is the “picture.”

The second question can have several solutions. One can think of the picture as everything inside the margins, even the invisible margin at the right, but not the margins themselves. 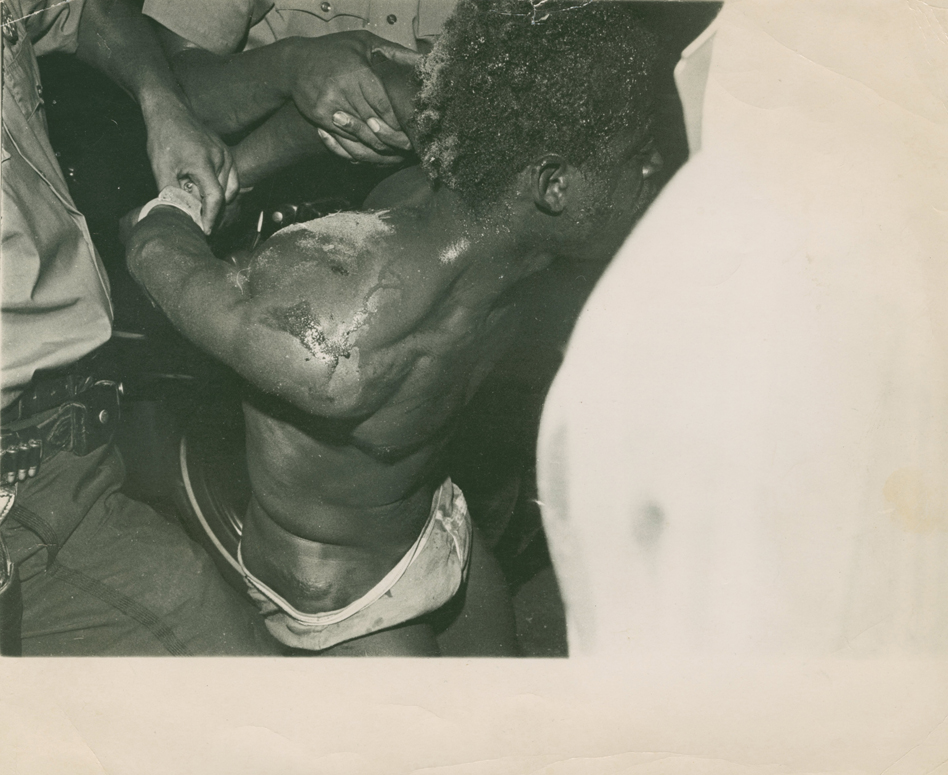 The picture can be cropped by a mat so the wider white area at the bottom is cropped out, and we see only the dark picture area and the white area at the right, but without the strip of the supposed right margin. 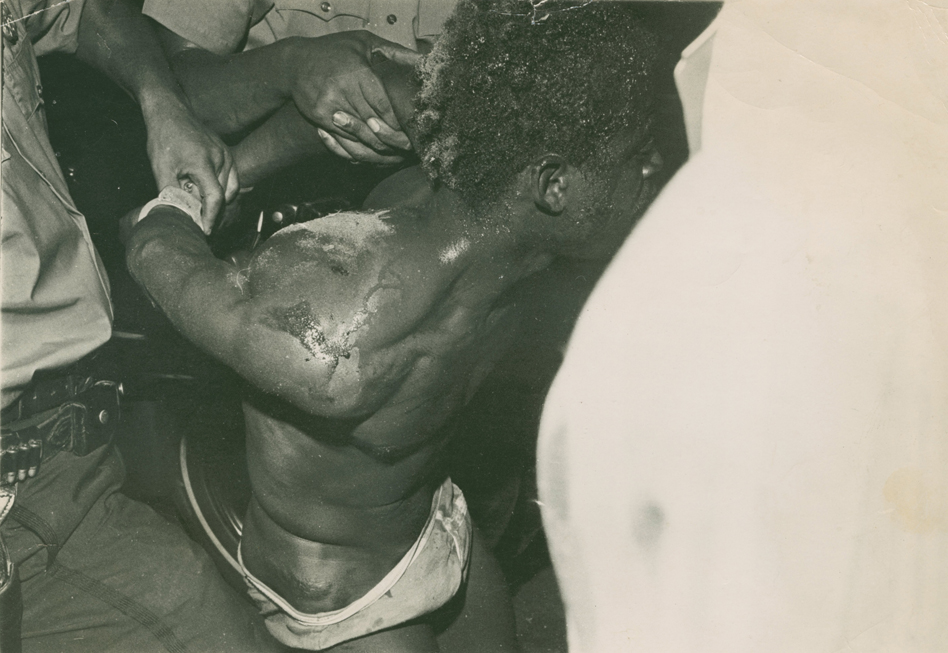 Or we can think of the photograph as everything on the full sheet of photograph paper, and that will include all the margins. That is the image presented earlier.

When I look at this photograph as it is now, in a sleeve but not matted or framed, other things come to mind. The white margins constitute some kind of border that separates the photograph from the world outside. But in a photographic print of this kind, I see the outside world encroaching into the photograph. Each photographic print is a physical object. It is not only an interpretation of the negative, but as a print it has a life and history of its own.

As is so often the case with this type of print, the corners are wounded from previous mounting corners. [Why are these still being used so frequently?] There are some folds and cuts that are coming into the edges of the photograph.

I very often see mats used to hide these invasions. They hope to restore the image to its “original” virgin state, though by cropping out some borders and edges they change it from the original. If a mat is chosen to cover some damage, this surely changes the picture. Many photographs offered for sale have been carelessly matted so that some of the image is unnecessarily covered, often with the person who did the matting not even caring. In this case, the photographer made an immediate decision to make the tight framing a major element in the picture. So we must respect this as well as we can.

It seems much better to “float” the entire print, so the entire image can be seen, including its edges. If there is damage that appears as a blemish, there are conservation techniques that can minimize the effect. These techniques are expensive, if they are done properly. It is only the low value still placed on many photographs that makes this cost out of proportion to the “value” of the photograph.

In the case of the photograph we are discussing, the invasion of outside forces somewhat parallels the picture itself, and seems an appropriate part of its character. The feeling of the paper, the character of the print, the indications of previous handling, tremendously enhance its character. They are part of what I love about it. The people in the image who are caught in this tightly framed space have a kind of vulnerability. That their photographic depiction is also vulnerable to outside invasion is somehow appropriate.

This is a great authentic vintage photograph. The chances are you will never encounter another example of it. What is it? What is its value?

It’s been a long time since I was struck by something that compelled me to write. Now I have lots of things that continue the thoughts started in this Newsletter so I hope to continue this.

This photograph is available for purchase. Click here for more information.