This is the 27th of these occasional essays on collecting photographs.

The daguerreotype plate that you usually see in a case or passepartout was itself once in the camera. It was worked on to create the image that we see, still on that original silver surface. In some cases the daguerreotypist would take several successive images, each one requiring a new plate in the camera, but this was costly and only done in special circumstances. Each plate is unique.

There was frequently a need to have several copies of an image, so instead of using additional studio time (in the case of portraits) the studio would frequently make a copy or copies of a daguerreotype onto additional plates. This could be done with a copy-stand without requiring additional sittings with the necessary adjustment of posing and lighting each time. Thus copies of daguerreotypes made in the original studio are not uncommon.
They are part of the normal practice of the era. Scenes were copied as well, as needed.

Paper copies of daguerreotypes were also made. There are many salted-paper copy prints of important portraits or other significant subjects. But these are less common than copies on daguerreotype plates. Daguerreotypists were usually not familiar with techniques of photographing and printing on paper, and albums of paper photographs were a separate market than daguerreotypes in the early period. 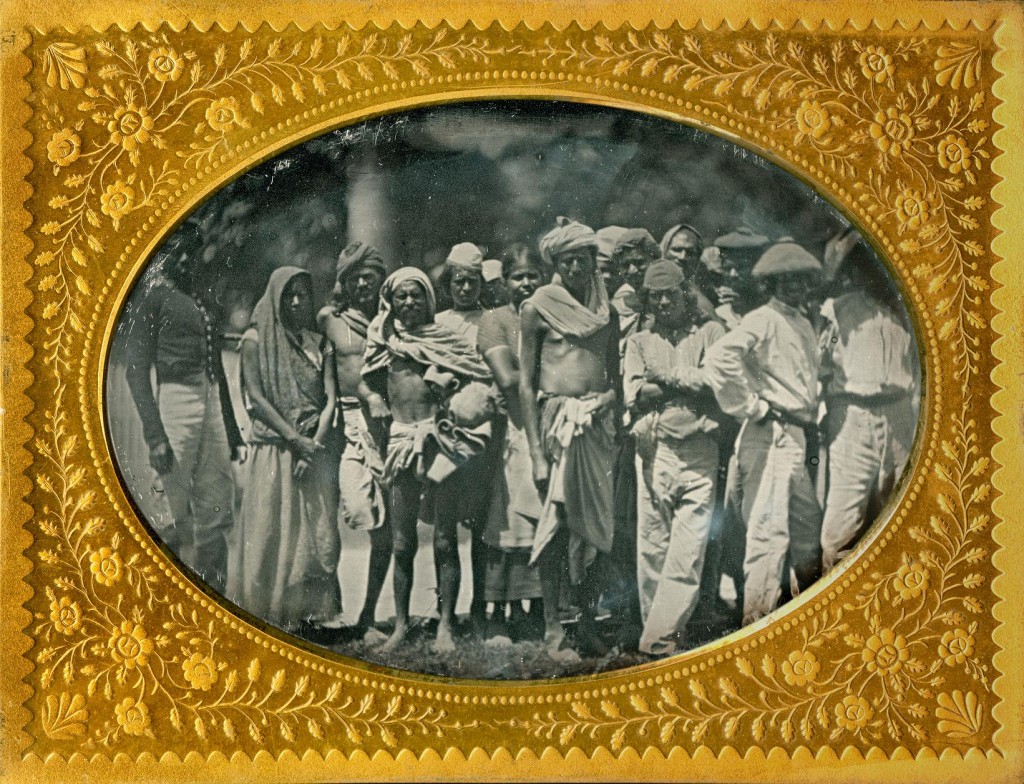 Indian daguerreotype in case and mat

In this unsealed daguerreotype, the entire plate–and part of the frame inside the edges of the copy–can be seen.

A certain amount of magical thinking views the original as containing something of the aura of the subject, whether a portrait or a scene, because it occupied the same space and time of the subject. In that view, the daguerreotype not only captures a visual impression of an instant, but it itself preserves something of that instant it shared with the subject. The daguerreotype is seen as a type of mirror of the scene that was before it.

This of course ignores the things about a daguerreotype that give it its special character far different from the mirror [or the actual scene in front of the camera]. The contribution of the physical process, the lens and other mechanical attributes of the camera, the framing and other elements of the photographer’s vision in composing the image and working with the plate and the chemistry, result in an object that has its own object nature.

It is surprising that this fetish does not carry as much into photographs on paper, especially from the now vanishing era of film. After all it is the negative that was in the camera, just as the original daguerreotype plate was.

Calotype paper negatives, from the same era as daguerreotypes, are seen as having their own aesthetic merit. Their physical characteristics are appreciated in themselves. They are not seen simply as just the source of the “real” photograph, and are not particularly valued for having been in the camera at the time/space of the exposure.

The glass plate negative, on the other hand, is usually not seen as having any merit other than as the source of the ultimate photograph. It carries no aura of having been in the camera and thus sharing the time/space of the subject. Its reversal of dark/light values, only a stretch removed from the “artificiality” of black and white itself, is only appreciated as a special effect, for example in some surrealist photographs. These are already from the era of flexible film, where the often miniature negative carries almost no value other than its utilitarian purpose.

It is true that exhibiting glass negatives still presents a challenge, but until recently daguerreotypes and other small formats were a challenge for museums to present.

Walter Benjamin, in his famous essay that is iconic in photographic theory, thought the loss of “aura” was one of the great features of photography, precisely because copies could be widely available that would be hardly distinguishable from the original.

What of the numerous prints of a picture? Even when the photographer prints them, are they always printed from the original negative? Surely not. A system of copy negatives was soon established. For widely disseminated images such as stereo views and cartes de visite, there were many copy negatives required to keep up with the demand. Indeed in order to print stereo views from the individual left and right glass negatives it was required to make a copy negative that would put the two images in their proper relationship.

As far as I am aware there is much to be learned about the printing details of most 20th century photographs. Contact sheets by their nature were made from the original negatives. But when did those negatives cease to be used for printing, and what replaced them? How many generations away from the original negative is a certain print? To what extent is a print a “copy” often multiple times away from the original? Doesn’t the intervention of the enlarger and the techniques of printing enhance rather than detract, even though they remove the print from an exact duplication of what was in the camera?

Getting back to what began these thoughts, I’m questioning why a copy daguerreotype is undervalued, as opposed to a paper print that may be many generations away from its “original.”

The materials of copy negatives were designed and constantly improved to give a “faithful” rendering of the desired image. Often the final print would intentionally reveal something of the intermediate process, for example in many pictorialist pictures.

Collectors of widely distributed small format processes such as stereo views and cartes de visite are familiar with crudely printed copy prints that were made from re-photographing paper prints. They are easily recognized because of their poor quality, and are justly looked down on.

But what of the numerous images that appear on different mounts, crediting different photographers than the known maker of the original? Many of these are only distinguished from the “original” by the name or lack of name on the mount. Are these images less directly “from life” than the images on the original mounts that were made from copy negatives?

Vintage press prints and even wire photographs are starting to receive the attention they deserve, as authentic “immediate” renderings of the subject. Indeed they often do convey the aura of the scene as originally captured much more so than later exhibition prints. Each version of a photograph is several generations away from what was in the camera, and each has its own strengths.

Are copy daguerreotypes comparable to those justifiably sneered views that were illegitimately copied from original prints and offer a degraded rendering of the original? I would argue that they were a legitimate part of daguerreian activities, generally made by the studio that produced the original, and should be viewed as many other forms of photographic prints.

I hope this has generated some thought about subjects that are important to explore further. How these issues carry into the digital area requires much more thought.

We also send theses posts and newsletter to our mailing list.  You can subscribe by entering your name and email address in the space provided at the top of this page.