I’ve been thinking about this in connection with our show of vintage Herbert Matter photographs of Giacometti and his work (opening reception tomorrow, Saturday, 7 – 10 p.m.). But it was already on my mind because of looking at some great mid-19th century photographs of French cathedrals at the recent 19th Century show in NYC.

Those photographs showed aspects of the cathedrals that were planned and labored over but could never be seen in that way by any worshipper, inhabitant of the location, or visitor. The artists who carved the details saw them from close, but could never see them from many different angles. Only certain views would be visible from the ground. Possibly while the cathedrals were being built certain vantage points could be found that were no longer available when the windows were installed and the construction completed.

But aside from offering views on the cathedrals, these were masterpieces of photographic art, and all the elements of photography were employed fully—time of day and light, vantage point and framing, and all the arts of printing.

Giacometti was one of the artists most widely photographed by the great photographers of the period. This was partly because he was a friend of many of them. But also his face and persona had a character that went along with his great art. Matter worked with Giacometti for many years to prepare for a book that would be the presentation of his work that was closest to Giacometti himself. Giacometti said that he learned things about his work from the photographs. 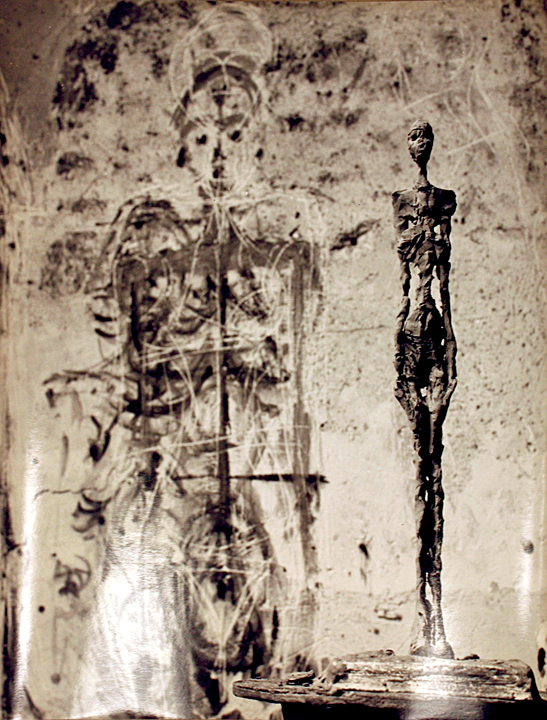 These photographs from the Matter archive reveal some of the things Matter experimented with during the long period of their working together. Of course lighting was significant as Giacometti’s later sculptures incorporated numerous indentations from working with clay. This was a far cry from the smooth surfaces of the work of many of his contemporaries. Because there are several alternate versions of several of the subjects, we can see how Matter worked with illumination as well as printing. Some of the photographs were intentionally printed very light or very dark.

Giacometti was interested in scale, and made small sculptures as well as very large ones. The photographs often obscure the scale of the original, making some of the sculptures or parts of them seem monumental. Matter also worked with radical angles and cropping, making images of some parts of sculptures into photographic compositions that had little to do with the entire  sculpture, but still revealed possibilities that were inherent in the work itself. This reminds me of so many photographs of the nude from the period that are not just vehicles of titillation that are flooding the photography auctions these days.

Matter also worked with backgrounds and groups. Sculptures appear against white or black backgrounds, or with paintings behind them or in studio settings. Several of his late works were tall and narrow figures of “Venus” or “Tall Woman.” We have a number of photographs in which groups of 4 or 5 of these are arranged in different positions. Matter always experimented with various manners of photographing things.

Individual photographs are striking artworks. The show provides an opportunity to see them in context, and to compare several variant photographys of the same sculpture or group.

The show will continue, by appointment, until the end of the year.