Beginning in the 1970s, Solomon spent 25 years documenting how white and black southern American identities shape and contrast against one another. This image represents a particular fixation on the workings of southern law enforcement, and provides a striking image of a white child already emblazoned with symbols of authoritative power.

There is a small, less-than one-inch crinkle that doesn’t break the surface on the lower left of the image.

Signed and dated in pencil on verso.

A large group of posters dealing with this 1938-39 anti-fascist film dealing with the Spanish Civil War. It was based on a scene in Malraux’s novel translated as “Man’s Hope.” It was not released until 1945 and was censored under pressure of the Franco regime and copies were destroyed, but it was later revived.

These were displayed in New York ca. 1950 by the Cultural Services of the French embassy. They are approximately 8 ½ x 11 or the reverse gelatin silver copy prints tipped onto 16 ½ x 13 ¼ inch or the reverse board mounts.

Four relate to the production or script writing of the film. There are 9 screen shots, and two portraits of Malraux. Six more deal with people involved in the production, one scene from a play about Shanghai and 3 more. Condition is good with no problems. $500 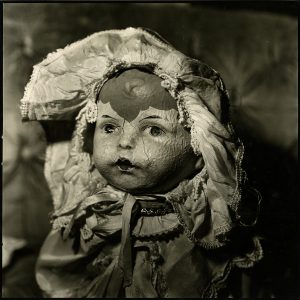 One of Solomon’s close studies of a worn and crushed doll. Solomon produced many such works in the early to mid 1970s. She claimed that dolls not only allowed her to hone her approach to photographing human subjects, but also that they presented opportunities to convey broken interiority. 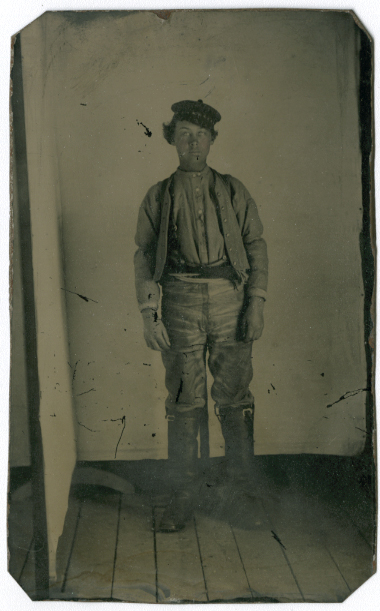 His face seems covered with dust. He seems to have just stepped in from work, possibly mining, into this crude improvised studio. While there are many occupational tintypes, this raw subject is unusual.  Small minor abrasions. 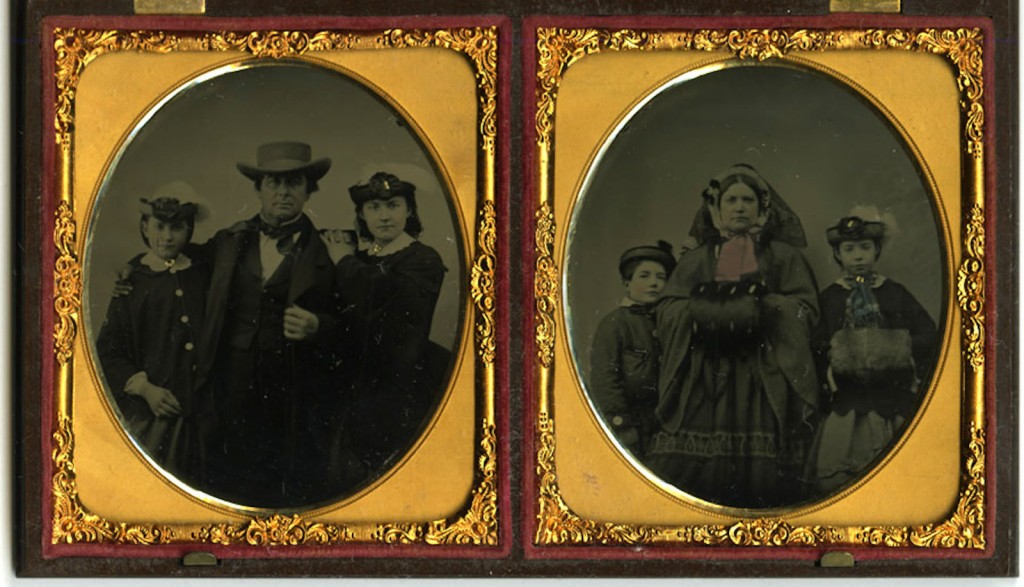 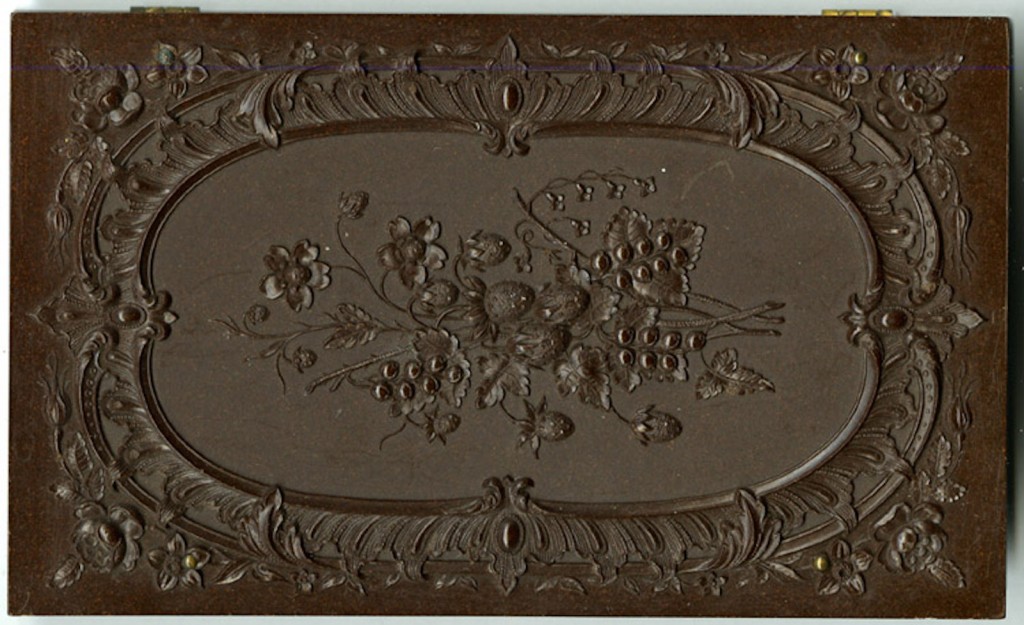 FINE AMBROTYPES IN A DOUBLE CASE

FAMILY GROUPS, 2 – 1/6 PLATE AMBROTYPES IN A DOUBLE CASE. The father poses with two daughters, the mother with two sons. There is some hand coloring, but what is remarkable is the very precise gilding of tiny details. The case is a mint condition brown double case with a “Spray of Strawberries” motif (Berg 2 – 4). [4]

Condition Report: The case is a mint condition brown double case with a “Spray of Strawberries” motif 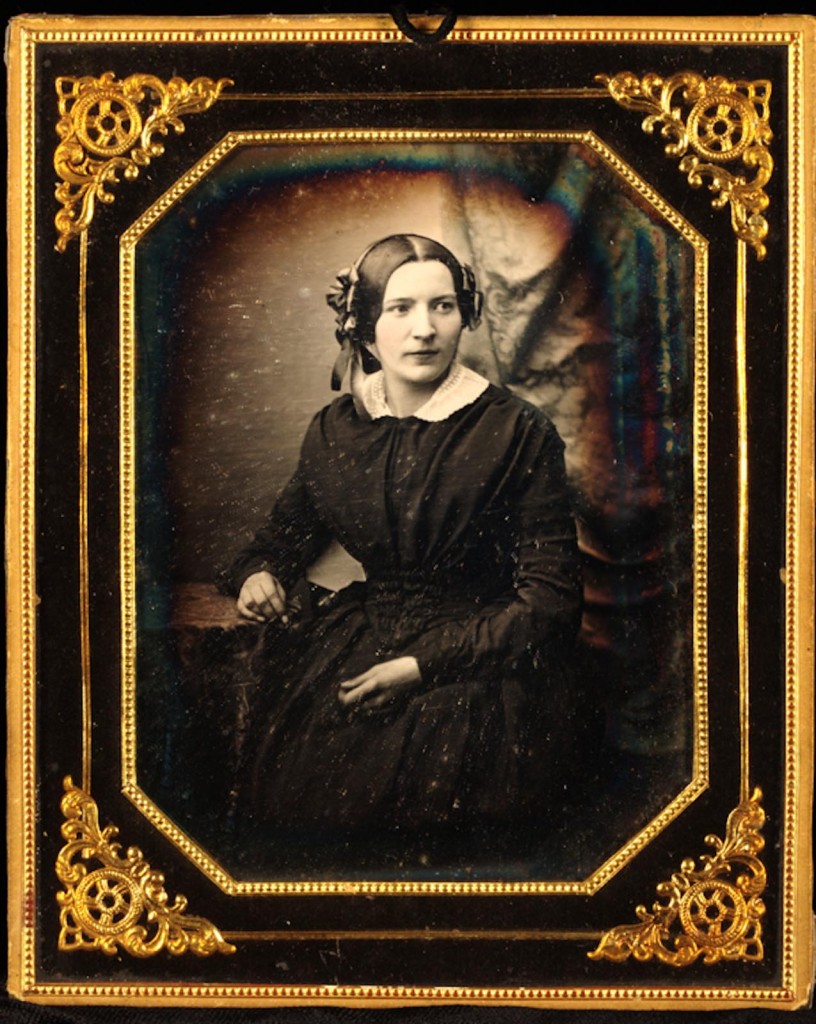 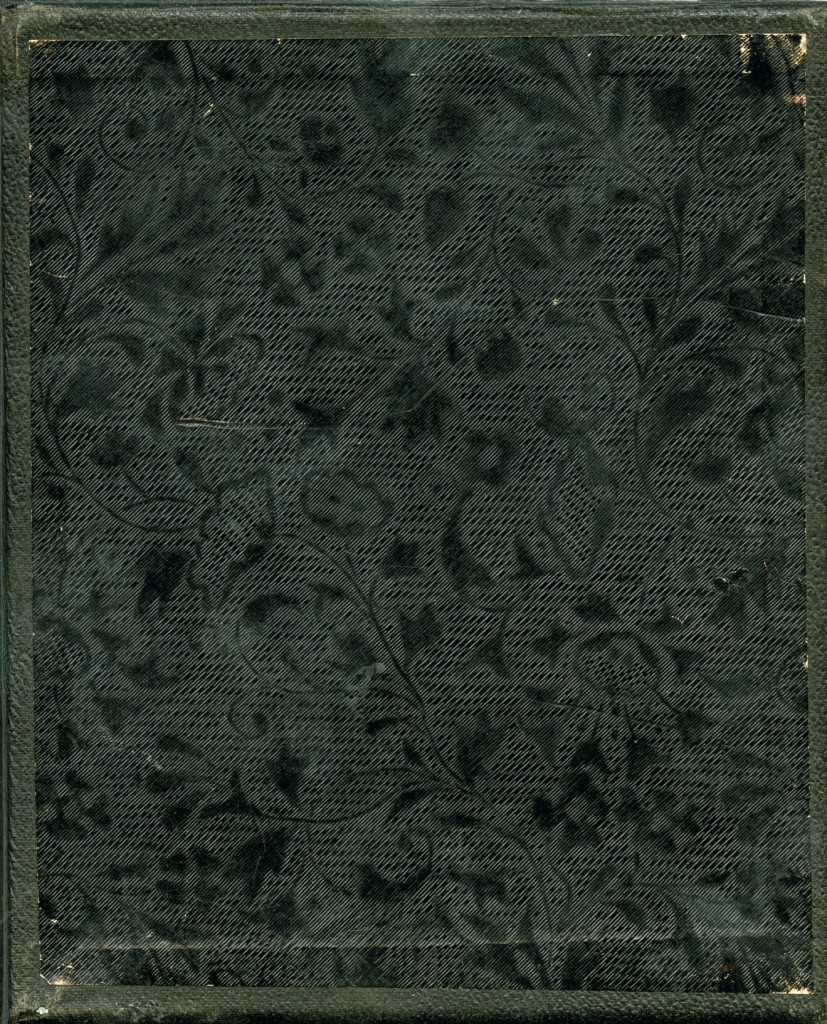 JOHANN EBERHARD FEILNER, WOMAN WITH RIBBON BAND ON HER HEAD. ¼ plate daguerreotype in ornate mat in a rare case. There is a thread at the top that allows the plate to be lifted from the case. The case is oversize: its outside dimensions are 5 ½ x 4 3/8 – inches. It opens from the top and hooks onto two latches at the bottom. There is a white silk pad and the back of the case has a wonderful floral design that I have never encountered before. The plate is sealed all across the back.”1848 October” is written in pencil. The presentation is typical of the other rare daguerreotypes by this artist from Bremen Germany that are in European collections. The quality of the image is remarkable. The spine is attached. The cover is warped. [4] 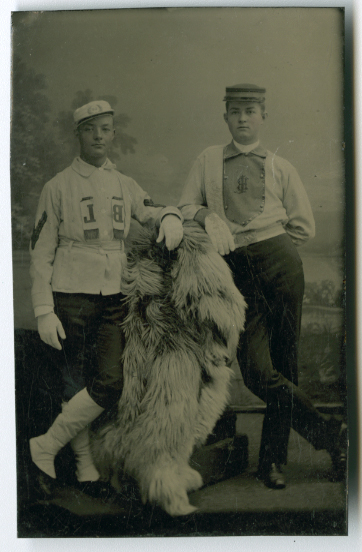 They cross their legs in opposite directions. I can’t tell what sport they are dressed for, nor what the fur is for. Interesting and clean undamaged tintype. 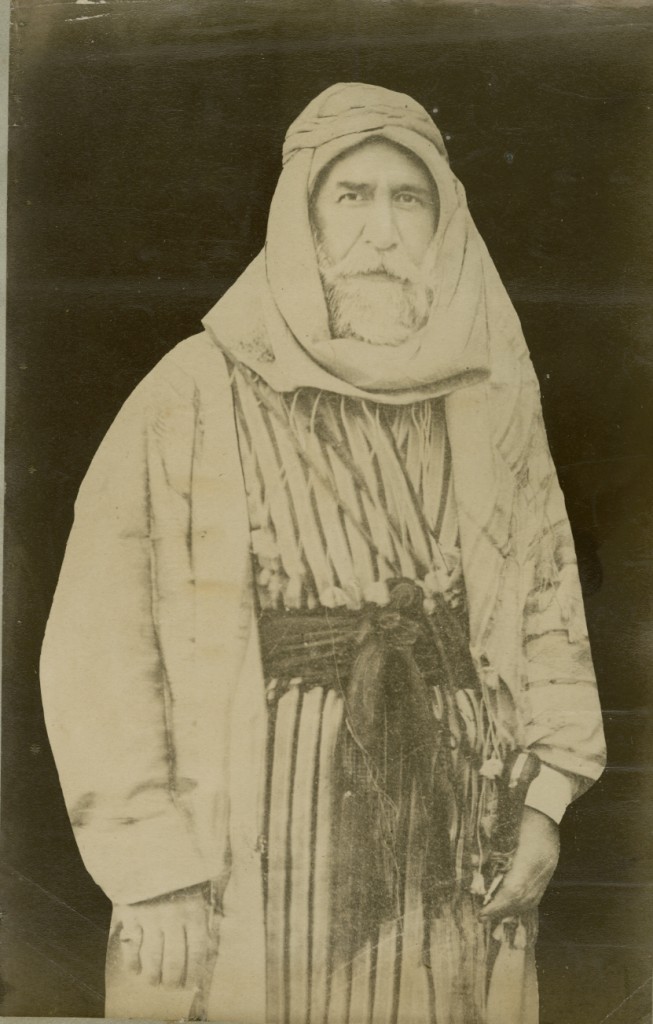 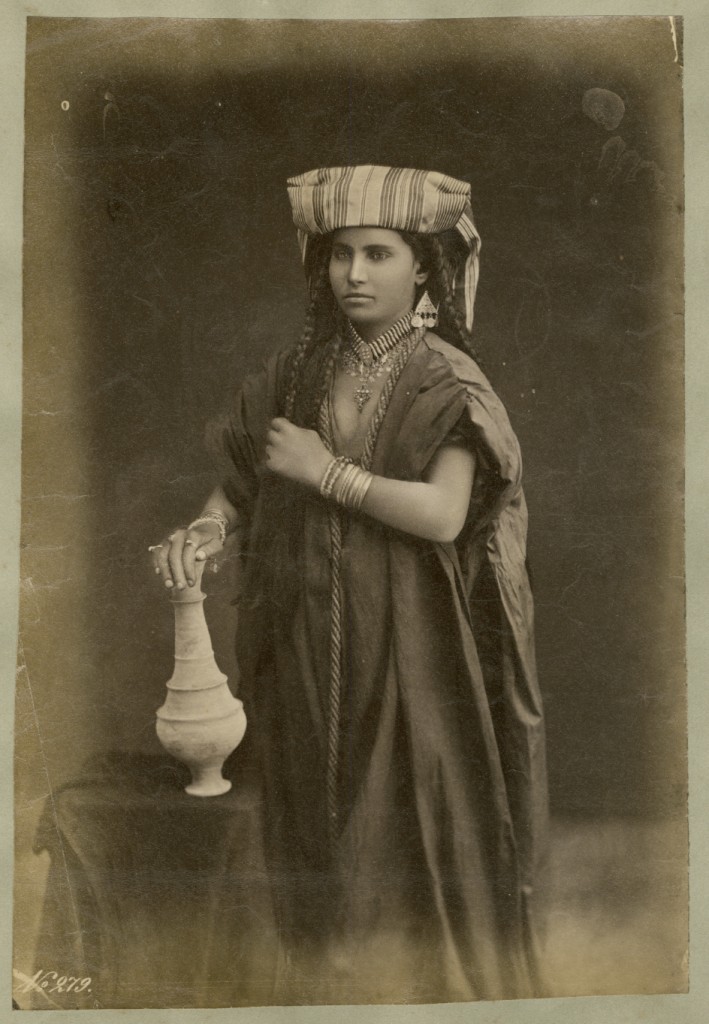 No. 279 inscribed on negative bottom left. 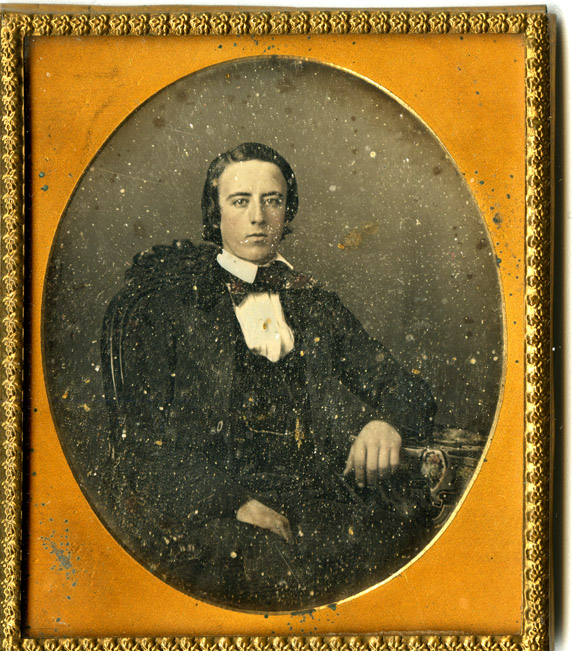 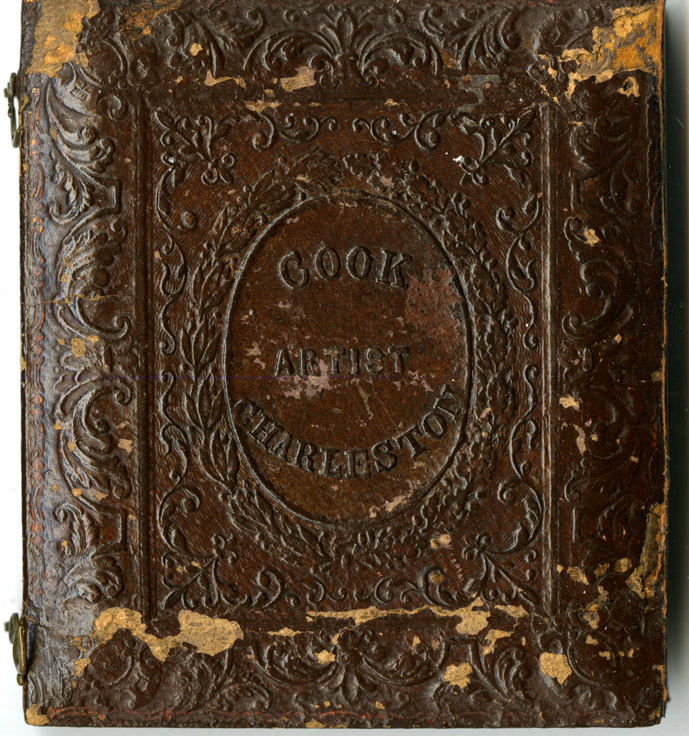 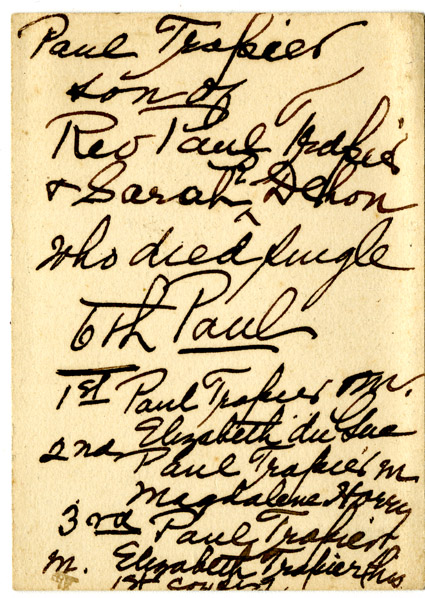 Daguerreotype, 1/6 This is very special on several accounts. First of all it is by George Cook, a major figure in the Daguerreian era. His main location was in Charleston. He started out in New York, had galleries in several locations in the deep south, and in St. Louis. He had extensive contacts with other of the great daguerreotypists. He assisted at Brady’s NY gallery and at Root’s Gallery in Philadelphia. This image is an a rare and desirable case with his “COOK/ARTIST/CHARLESTON” embossed on the case cover.

It is not only identified as Paul Trapier, but comes with a  card giving the long history of the family that played a significant role in the spiritual life of Charleston.

The daguerreotype has its original seal, so you can see dust under the glass. The plate itself has a few light spots. It has subtle coloring. 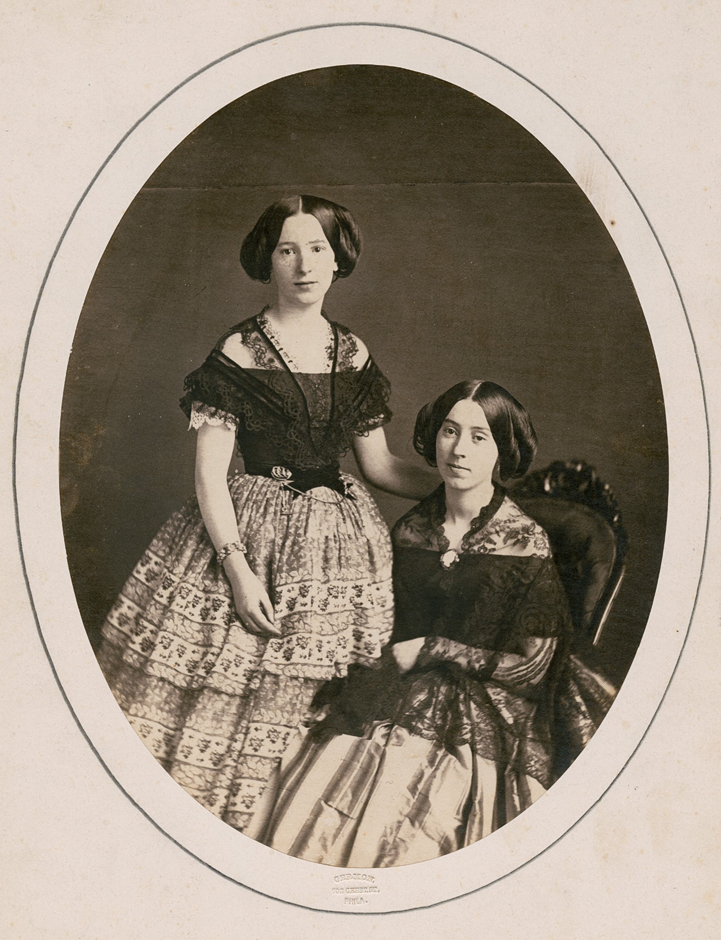 8 1/8 x 6-inch albumen print, with Germon’s blindstamp on the mount, below the print. No damage, but surface lacks perfect sheen. 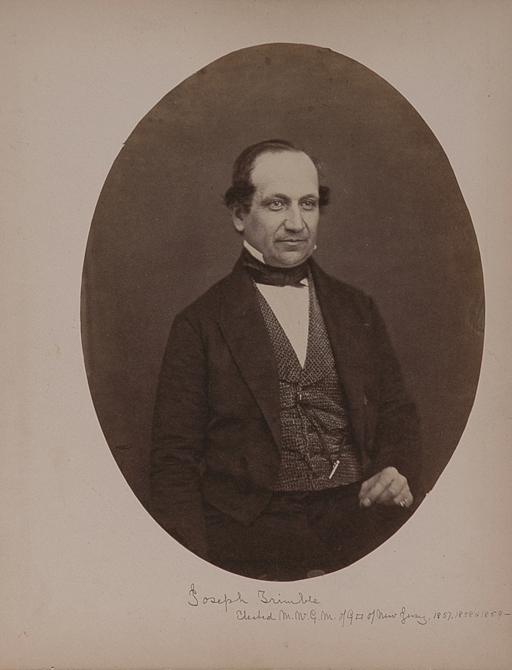 8 x 6- inch oval salted paper print an a board album page from an album devoted to New Jersey Masons. His name and Masonic rank 1857 – 1859 is noted in period pencil beneath the print. He has a Stanhope at his waist. 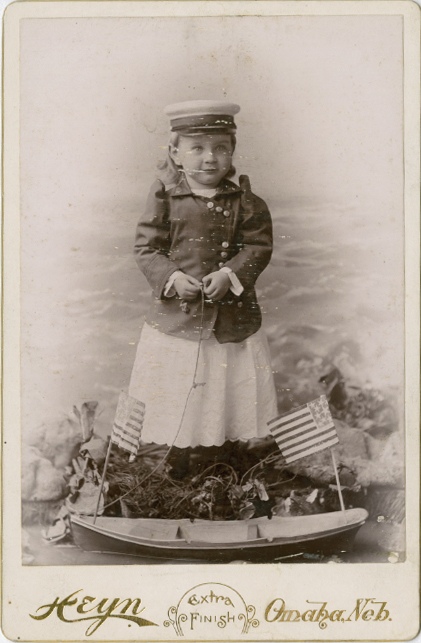 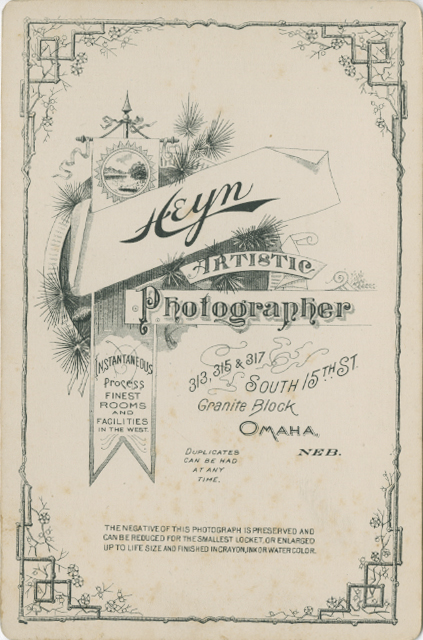 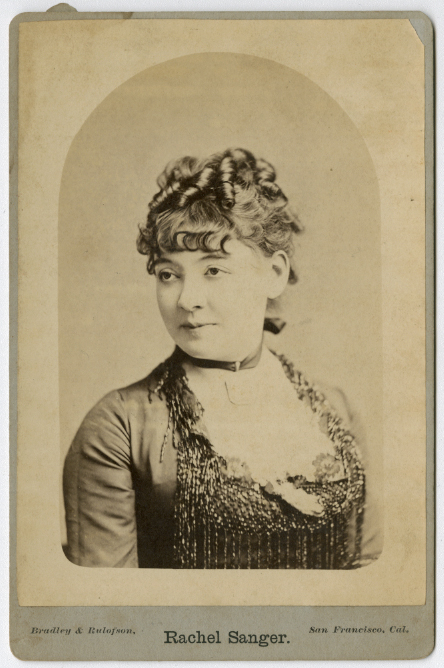 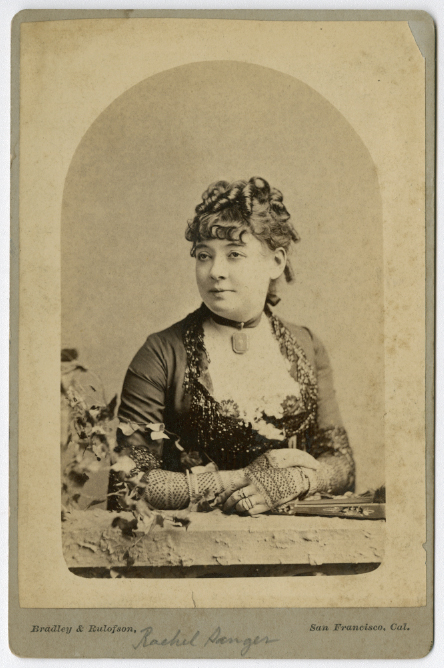 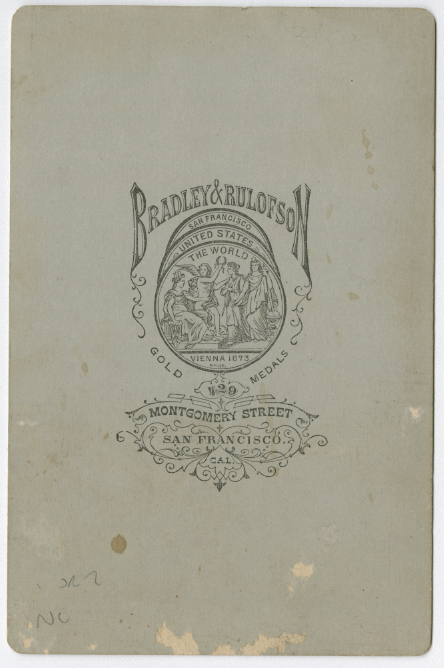 A pair of cabinet portraits by Bradley and Rulofson, one a closer variant. Sanger is most known for her roles with the D’Oyly Carte company which performed the works of Gilbert and Sullivan.  From their website:

‘In 1878 she played the leading role in Diplunacy, a burlesque at the Strand, and in 1879 she was engaged at the Gaiety Theatre, Dublin, where she created the part of Annie in a play called Pair o’ Wings. She then made her way to America, appearing first at the Corinthian Academy of Music, Rochester, New York, as Princess Zeolide in W. S. Gilbert’s The Palace of Truth in September 1879. She later performed at Haverley’s Brooklyn Theatre in November 1879 as Minnie Symperson in Gilbert’s Engaged, before making her Manhattan debut in January 1880 at the Park Theatre in a Gilbert double-bill, as the Marchioness of Market Harborough in The Wedding March and Jenny Northcott in Sweethearts. In 1880 she appeared in San Francisco as Mabel in a Carte-sanctioned production of The Pirates of Penzance with Charles Locke’s Pacific Coast Company..”

These cabinet cards were thus made in 1880 when she was in San Francisco. 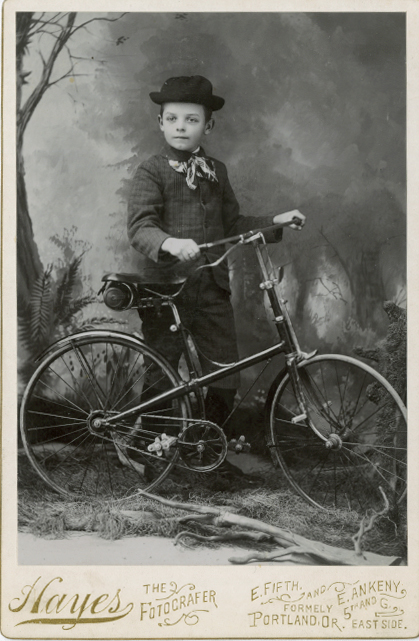 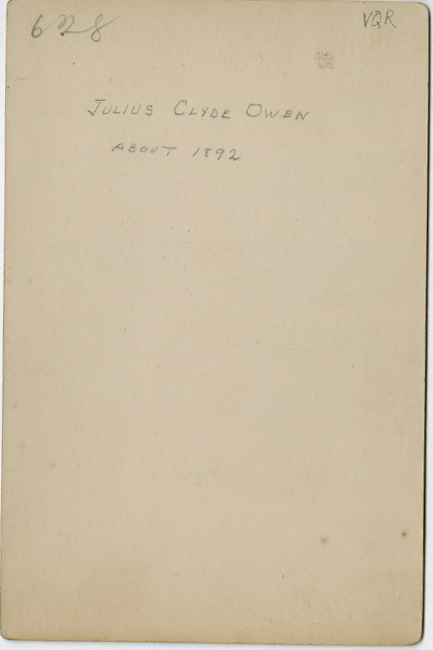 The lucky lad is identified on the verso as Julius Clyde Owen, “about 1892.” This is a crisp clean cabinet card with excellent detail of the bicycle. Cabinet card by Hayes “The Fotografer” Portland Oregon. 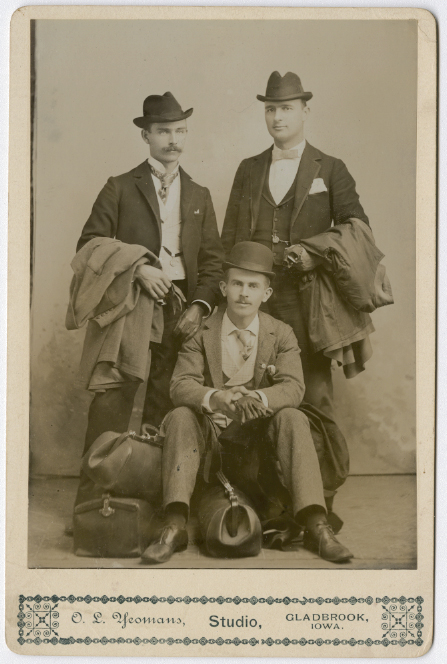 The gents pose in the studio all dressed for travel. The have their coats and their bags packed. Cabinet card by O. L. Yeomans, Gladbrook, Iowa.