Gurrey was a pictorialist photographer in Honolulu at the start of the 20th century. See “Photographers of Old Hawaii” by Joan Davidson [1977]. A portfolio of 50 “Hawaiian Types” was purchased and displayed at the 1909 Alaska-Yukon-Pacific Exposition in Seattle. That portfolio was subsequently purchased by the Smithsonian, and is now in the National Anthropological Archives. Portfolios with different subjects and individual prints are in very few institutional collections, but her work is rare and almost never appears in the marketplace. Because her subjects were often of mixed races, and Gurrey made a point of indicating their origin, her work has been the subject of some theoretical social analysis. Professor Heather Waldroup, in an article forthcoming in History of Photography, discusses the implication of the photographs in the 1909 exposition, and provides much useful information. As she points out, Gurrey’s sensibility is related to that of Curtis. 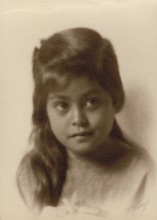 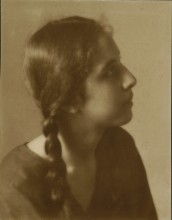 Profile of a Girl by Caroline Haskins Gurrey 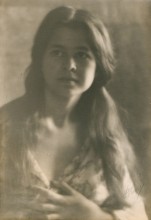